10th August is World Lion Day. The main purpose of the day is to raise awareness about lions and educate people about issues concerning their protection and conservation Kenya currently has a population of about 2,489 lions, compared to the 2018 estimate of 1,970. That’s good news but more needs to be done to protect these precious big cats.

Last year, we had a one-on-one with Jeneria Lekilelei of Ewaso Lions and he gave us insight on lion conservation in Kenya

Samburu warrior Jeneria Lekilelei is the Field Operations & Community Manager at Ewaso Lions. He talked to us about his foundation Warrior Watch, his duties at Ewaso Lions, his favourite cats and how we can all help with lion conservation:

KB: How did you first get interested in lion conservation and how long have you been doing this?

JL: When Shivani [Bhalla, the founder of Ewaso Lions] came to Samburu National Reserve and started looking at lion threats outside the park, she met with the warden at Samburu Conservancy and asked if she could hire three guys to work with her. That’s when I first got interested in lions. Before that I didn’t know anything about them. I’ve been working in lion conservation for ten years now.

KB: Tell us a bit about Warrior Watch and how you got the community Morans to be part of it.

JL:  Although we were aware about the human-lion conflict, I first (directly) encountered this situation with the Morans.  We knew that to protect lions from being killed we had to bring the community into conservation. We started with six warriors and discovered that being involved in lion conservation directly changed attitudes. When the Morans give their livestock water they can still talk to non-warriors not involved in the Warrior Watch program and tell them where the lions are and what areas to avoid. They also talk about the importance of lion conversation.

KB: What does your job at Ewaso Lions entail? What does a typical day at the ‘’office’’ look like?

JL: Most of the time I’m out in the field monitoring the lions so I can tell the community where they are when the people are out in the bush with their livestock. Second, I run community meetings and workshops – maybe four a month, sometimes more -because if a lion moves to a certain area, I need to initiate a community meeting to make sure everybody is vigilant and doing careful husbandry.

I also attend conflict situations when lions kill livestock. I drive very quickly to that area before the warriors or anyone can take action (to act as a mediator). I always empathize and tend to first talk about the culture – within our culture we believe if you have ten cows one will be killed by a lion. And culturally, people also think lions are a good sign of hope – lions mean healthy ecosystems, and heathy landscapes mean healthy livestock. I also talk about tourism and that people come from all over the world to see lions and we’re so lucky to have them in our homeland. Finally, people like the scholarship program through Ewaso Lions that helps send kids to high school. They know if you had 100 cows, you can’t send ten cows to sponsor kids for school; only the lion program can do that. Wildlife helps everyone. People ask how many lions are in Kenya. It’s important for them to know there aren’t that many – fewer than 2000 in Kenya. Every year about 100 lions are lost and if we continue to lose that many, we won’t have any lions in 20 years. 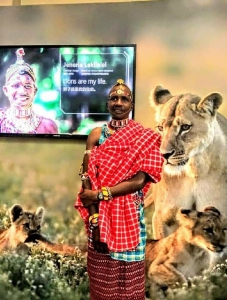 KB: What’s the most exciting part of your job?

KB: How do you go about naming the lions the organization tracks?

JL: With the lions who live in the community, we look to the community to give them names. This makes them feel connected to the lions, the project and part of lion conservation as well.

KB: How do you tell these magnificent cats apart without using any fancy tech? How do you know who is who?

JL: Two things. First, whiskers are very unique, like a thumb print. Once you are around them and know the whisker spots, they can go away five years and come back but their whisker spots remain unchanged. Second is their markings. When they hunt, they go through bushes and get cuts on their ears, or if they get in a fight, they get cuts. So, you can use ear notches and other scars to tell them apart, but that’s not the best way because they can get new cuts so we don’t use that the most.

KB: Any scary encounters you’ve had with a rogue lion?

JL: I’ve never been attacked by a lion but there was one lion who had a broken leg. He couldn’t hunt by himself and went across the river to a village and jumped into a boma and killed 15 goats. In the morning he couldn’t run to escape the people so we wanted to get him away from the village. He was really scared. We had to use a different approach after we saw the lion was stressed. I got my warriors and we formed a big line of people and made noises so he could hear people coming and walk away by himself without being harmed. That’s the one scenario I’ve ever had with a lion.

KB: You recently lost an Ewaso cub; our sympathies go out to the Ewaso family. Your response to her plight was quick. How did you get to know about her suffering without a ‘’cub distress’’ hotline in the park?

JL: We got a report from the guides at one of the lodges. They found the lions at 9 am and one of the guides saw a big lion grab the cub by the neck and shake it. He called me up immediately about the injured cub. We rushed to that area and found the young cub dragging half her body on the ground, trying to drag herself into the bushes. We immediately called the KWS vet -luckily, he was in the park and came right away. There were broken bones in her back and we agreed to monitor her and see if she could recover. We guarded her day and night for five days and we saw she wasn’t going to survive. It was very hard for us to watch the cub suffering. She couldn’t go with her mom or drink water or anything. We called the vet again to come and see if there was any chance of recovery, but we saw she wouldn’t make it and, together with Samburu National Reserve rangers and the vet we agreed to put her down. So, we do have a hotline in the park because we’re all communicating with each other. We all work together – the guides, the park management, Kenya Wildlife Services, the community, Ewaso Lions. 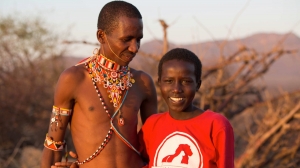 KB: You’ve been nominated for the Tusk Conservation Award, the Wildlife Warrior Award from the Houston Zoo and recently been featured on Citizen TV’s Wildlife Warriors in Kenya. How did they find out about your work and how did winning these awards impact you?

JL: Winning the awards makes us know we’re not forgotten in northern Kenya. It means a lot to my team as well because of how much we put into lion conservation. It motivates us to see people recognize the work. It’s an award for all of us – the team and our partners working together.

KB: Are you mentoring future Jenerias in the local schools?

JL: Yes. I take the young generation to see lions up close and that helps build and mentor future Jenerias. With our Lion Kids camps there are so many of them that want to do conversation in this area as a career. One boy, Junior, first came to Lions Kids camp and said “I need to be like Jeneria. I need to go to school.” 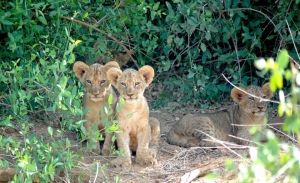 KB: What are some of the ways we can help you and your team conserve these beautiful cats?

JL: One of the best ways is to join us in lion conservation – help spread the word. Tell your friends, tell your family. That will really help my team, the lions and with lion conservation. We can’t do anything without financial support to hire people, so we always appreciate that kind of support too.

KB: Before we wrap it up, who’s your fave Ewaso cat? We know you love them all but you’re allowed to be biased.

JL: My favorite cat is a female called Nanai – which means “my own” in Samburu – because she was among the first lions I saw as a cub and I studied her litter a lot. She was so cute and was always the last of the litter – she walked slowly and was never in a rush. She’s fearless now – looks at the car and wonders what it is. She doesn’t know about threats in the world, so if her pride gets in trouble she could be in trouble. She just means a lot to me. That female built something in my heart. Now she’s has had two litters of her own so that’s good.