The Lions of Tsavo

Located about half way between Nairobi and the coast, Tsavo National Park is nearly 22,000 square kilometres, making it the largest national park in Kenya and one of the biggest in the world. Tsavo is split into Tsavo East and Tsavo West by the railway and the highway. Tsavo is world-renowned for its diverse bird life and mammals large and small including the unusual Tsavo lions.

Two of Tsavo’s lions are some of the most famous in the world, popularly known as the man-eating lions of Tsavo. Several thousand mostly Indian labourers were building the Kenya to Uganda railway in the late 1800’s. For almost 9 months in 1898, two male lions terrorised the workers, dragging labourers from their tents at night and eating them. Sometimes as many as two men disappeared per night.  There are many conflicting reports about how many people ended up as dinner for the lions but estimates are in the ballpark of 135.

Extensive scientific research has established the infamous lions’ culinary preferences for humans were partly due to dental disease. Also there was a reduced amount of prey available to the lions due to Rinderpest – a disease not native to the African continent, which was responsible for wiping out buffalo and cattle. And the ivory trade of the 19th century also wiped out large populations of elephants which were a source of prey for the lions. So, human beings were a soft and easy alternative compared to conventional prey.

Eventually, the man-eaters were hunted down and killed in December 1898 by Lieutenant-Colonel John Henry Patterson who was the engineer in-charge of the railway bridge being built. Twenty-five years later, Patterson sold the trophies to the Chicago Field Museum for $5,000 each. The skins were then stuffed and placed on display along with the original skulls. 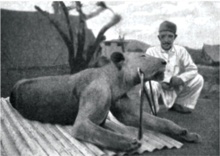 The lions of Tsavo are not the only big cats to have unleashed a reign of terror on human populations. In Tanzania, between 1990 and 2004, a total of 563 people were reportedly killed by lions. In the Gir Forest of India, another trio of lions was captured after killing three people. These reports are attributed to rising human populations which leads to declining numbers of prey and human/wildlife conflict.

The fascination with the man-eaters of the Tsavo has been the subject of three films, the latest being the ‘The Ghost and Darkness’, released in 1996, and a book by Patterson titled “The Man-Eaters of Tsavo and Other East African Adventures”, at the request of President Theodore Roosevelt in 1907.

And the fascination with lions in Tsavo endures through modern scientists who have tried to discover why they have no manes and in what other ways they are different than other lions. The most likely explanation for their bald heads seems to be that the blistering heat and the thorn bushes make lion manes impractical in Tsavo. 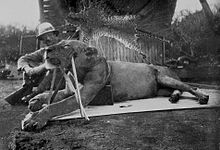 Tsavo lions also differ from others in their social structure – their prides are made up of large groups of females ruled by one male lion instead or two to four, typical of prides found on the savannah. Tsavo lions are thought to be more aggressive due to their elevated testosterone levels which helps them protect a larger pride and also inhibits hair growth.

Tsavo National Park is a popular safari destination for adventurous travelers looking for an alternative to the Masai Mara during peak season. Tsavo East National Park is also the only Kenyan park that permits night drives. Why not give it a try? You may get rewarded with a Tsavo lion sighting.