A musical concert that transports you back to the 90’s and in its third year, The Heng is Kenya’s leading nostalgic concert.

We’re going back in time to when we had to wait until Sunday to cram lyrics printed on the newspaper.

To a time when we’d dub music on the cassette tape.

To a time dungarees and high tops were the in thing.

To when 10 bob was enough to buy you and your crew snacks. Good times.

The performers will bring their feel and style to songs by award-winning artists such as Backstreet Boys, Faith Evans, Michael Jackson, Mario, Usher and many more.

The 3rd edition of The Heng! is bound to be a night to remember as June Gachui, the Creator puts it, “The Heng! is a unique night where everything from the 90s comes to life. Remember the music, the dressing, the hair and even the choreography? Well, the Heng offers you a place to come celebrate while paying tribute to your 90s memories. Come and commune with your crew while grooving to music that you grew up to; sounds that unlock special memories.”

DJ’s for the night;  DJ Pinye and DJ Adrian.

Choreography and dance by Art in Motion.

We bring you captivating and powerful stage presence coupled with visual effects and an enticing set design; an exciting experience that you shouldn’t miss!

The Music Director, David Hunter had this to say about the event, “The 90’s was a decade of R&B music that dealt with the full spectrum of love songs that you could sing and dance to, from Break-ups to Marriage and everything in between. A magnificent time to be alive and an even better time to be in love. Anyone who attends will be saying “this was the party of the year!” Everything that feels good about growing up in the 90’s will be alive and in full effect!!”

The Creator, June Gachui is one of Kenya’s most sought out entertainers. June’s level of production excellence is both coveted and expected in all that she touches.

The Heng! 2022 is poised to blow the lid and continue to raise the bar to continually set a new standard of live performance and production in Kenya. Grab your tickets HERE.

We can’t wait to see you! 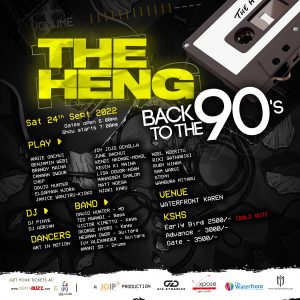