Which will be the next “‘Wood” to emerge?

The movie industry is a multi-billion dollar industry, with estimates putting its global annual worth at USD136bn. To put this in perspective, that is almost the same as the recent annual gross domestic product of all East African nations combined.

A 2018 study of African film trends sponsored by the Goethe institute predicts that we could increase box office revenue alone to $2bn if we were to invest in film distribution infrastructure in the same way that countries like China have done.

But more than box office revenue, investing in film production brings with it a plethora of economic advantages: youth employment, skills building, global awareness of a nation’s social and historical identity, and growth in auxiliary industries such as hospitality, industrial machinery and equipment.

If we look to some of the world’s most successful film industries, we can learn a lot about what it takes to become a global leader in movie production and distribution, and, in doing so, perhaps create our own global film industry here in Kenya.

The biggest “‘wood” that comes to mind is, of course, Hollywood. The United States’ film industry contributes $51bn to the nation’s economy, equating to more than three times the total value of the Kenyan economy. What makes this ‘wood’ so successful is a combination of three factors;

1) Almost all movies are in the English language, and therefore easy enough to dub/subtitle or be understood in almost any country. English is the most spoken language in the world, with over two billion speakers.

2) The United States, ‘land of the free, home of the brave’, to quote its national anthem, has successfully positioned itself as the most aspirational, hope-filled land in the world, and one which all other countries want to be, and and all other people want to move to. This makes its movies equally as aspirational and desirable, flaunting a lifestyle that many dream of attaining some day.

3) Investors and decision-makers recognize the value of the industry and what it brings to both the economy and the country’s development. They are therefore willing to invest heavily in it. Film scripts can be more valuable than solid gold, and every young person dreams of getting into the industry to ‘make it’. Hollywood is an aspirational world within an aspirational country. 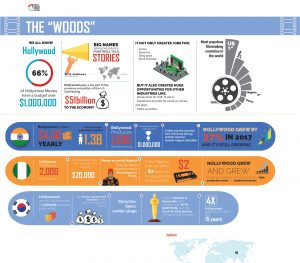 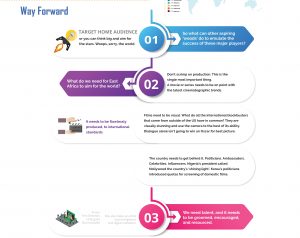 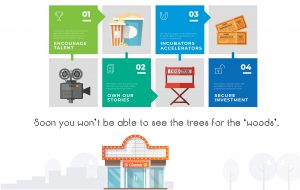 If we turn to another very different ‘wood’ we see that these factors are inverted. Though it lags far behind Hollywood in terms of economic value, Bollywood, India’s Hindi language film industry, grew 27% in 2017, and has a potential audience almost as large as the English-speaking world, with a national population of 1.3billion people.

The lavish, big-budget productions of Bollywood often rely on well-known names and celebrities to carry the story, along with melodrama and visual effects, as opposed to strong or innovative artistic merit. This is not to say that they are bad films; on the contrary, Bollywood films are popular the world over, and there are regular slots on mainstream TV channels in many African countries streaming new and classic Bollywood movies.

For the most part, the plotlines and characters are repetitive and, in being so, are reassuring to a national audience, and keep people coming back for more.

Nollywood rides on a similar wave of tapping into the nation’s psyche, and repeating recognisable tropes in thousands of films each year, regaling a nation and, by extension, a whole continent, with low-budget movies that bring great pride to the Nigeria. What stands out more than any other film industry is the pride that the nation takes in the films that their country produces.

Even the president has cited Nollywood as the ‘shining light’ of the country. Once decision-makers recognise the value of this industry, it has permission and room to grow, with greater investment coming in from both public and private sources, and greater importance attributed to infrastructure and events surrounding the film industry.

Korea, with its staggeringly successful ‘Hallyuwood’, is a perfect example of this. The government identified the film industry as one of the keys to unlocking the country’s growth as an international power, and invested heavily to grow it, from the late 20th century. It is partly to this that we can attribute the Oscars’ first non-English script to win the Oscar for Best Picture, with the showstopping Korean dark comedy-thriller, Parasite, in 2019.

So what can we learn from all these established movie industries, to help us replicate them, and detect or even dictate which will be the next big ‘wood’ to emerge?

To begin with, it requires national backing. The population, legislators, and investors all need to put their all into supporting the industry for it to grow. The policy environment needs to be conducive to allow for filming, for freedom of speech (ideally), and for for-profit distribution.

Secondly, to reach a global audience, you need to tell global stories that everyone can find some common ground with. A report written by Nicolas Miraudot, of the OECD, puts it eloquently: “A global brand has to cater to the tastes of consumers in different countries, which consequently causes it to lose some of its local characteristics, but it also needs to have its own identity to differentiate it from its competitors.”

This could be applied to any country that wants to foment a film industry that reaches beyond its national borders. This is comparable to internationalised versions of national cuisines, making the exotic more palatable, such as Asian restaurants outside of Asia toning down their spiciness, or Indian restaurants serving meat versions of traditional vegetarian dishes.

Thirdly, you can’t scrimp on production quality. Top-notch productions that draw in big bucks require investment in top talent and high-end equipment. This means investing in cultivating talent (the Africa Digital Media Institute based in Nairobi is an example of this) and teaching international standards of technical skills.

It also means providing access to funding for production so that teams can access cameras, lenses, hardware and software to produce the best quality cinematographic outputs that can make it to the silver screen in all corners of the world, from Hollywood to Hallyuwood.

Whilst some East African film industries have gained enough local traction to warrant their own ‘wood’ suffix — consider Kenya’s Riverwood, or Tanzania’s Bongowood — they are still far from  gaining the notoriety and traction that is necessary for them to contribute significantly to the economy, through revenue and job creation.

If all the right ingredients are combined, this is possible for these East African countries, and there is certainly space on cinema screens and, particularly, on online streaming platforms, for more creative, global content. We can hope that the stars align and the ingredients fall into place so that the next ‘wood’ might just be an African one.