Twitter Streets: The Most Talked About Trends Today -July 10 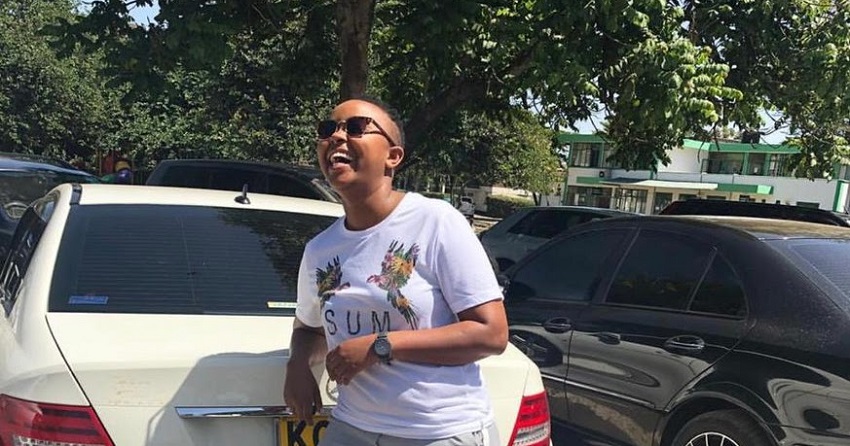 Makena Njeri’s vehicle was vandalized over alleged cheating rumors. News surfaced on the Kenyan Twittersphere, after a viral photo of the media personality’s Mercedes Benz was spray painted on the door and hood. “Makena Cheater”  and “Fu*k You” writings got netizens believing it might have been the unknown girlfriend, with most insinuating that she allegedly cheated with Marini CEO,Mitchelle Ntalami. Makena has since responded with a post in which she seemingly dismissed the claims.

Twitter FBI and DCI have received intel that Makena Cheated on her Girlfriend with another girl.
We are conducting investigations to make a conclusion whether its men or women who are TRASH.
As things stand, We can only state that things aint easier on the other side too. pic.twitter.com/YEgspK6yIX

😂😂😂
Ukifikiria ati you are handsome and ukikumbuka Makena is a combo of handsome and beautiful you cannot can😂😂😂😂😂😂😂😂 pic.twitter.com/Ak9jHLEjPS

Beyoncé has released her highly anticipated collaboration project with Disney’s “The Lion King”. “Spirit” is the first single from the live-action remake’s upcoming album, “The Lion King: The Gift”, which will feature various recording artists. The Beyoncé-produced album is set for release on July 19th, same day as the film’s box office premiere.

“The Lion King: The Gift,” an album featuring global artists & steeped in the sounds of Africa, produced & curated by @Beyonce Knowles-Carter, will release 7/19. “Spirit,” the single from the album & soundtrack for The Lion King, will be available tonight. https://t.co/IbMpQvJ97U pic.twitter.com/AA7Fxl7hb7

One minute into listening to Beyoncé’s new song ‘Spirit’ from the #LionKing soundtrack pic.twitter.com/Lod1lVelQA

Forbes Declares Kanye’s Yeezy Sneaker Brand to Be Worth $1Billion

Kanye West has been featured on the cover of the latest issue of Forbes magazine. The magazine estimates his Yeezy sneaker empire to be worth $1billion, a comeback from the rapper’s $53million debt in 2016. Forbes also estimated that the shoe empire’s revenue, now with Adidas, is set to top $1.5billion by end of this year.

Kanye on @Forbes!!! I love this cover and article. Kanye has worked so hard to build Yeezy and always stays true to his vision. He is my inspiration ✨ pic.twitter.com/yoBVXiQerv

I watch how hard he works as he puts his soul into every idea & product that he creates. It’s of no surprise to anyone who works w Kanye that he has been able to turn millions of $ in debt into a billion dollar empire in only 4 years – 100% on his own terms while owning it 100% pic.twitter.com/XQnoSUuVA2

.@Forbes estimates that Kanye’s Yeezy line will eclipse $1.5 BILLION in sales this year

An unidentified lady embarrassed Reekado Banks during a live TV interview on Tuesday. The lady, who demanded to speak to Banks, accused the Nigerian artist of sleeping with, and ignoring her calls later on. This has since sparked a Twitter conversation about the “Move” crooner, who seemingly looked confused when the accusation surfaced. Banks expressed his disappointment on Twitter, adding it was but a not-so-funny prank call.

That Gbas Gbos Moment When A Girl Called In To Say Reekado Banks Had S*x With Her And Didn’t Call Her Again… 🤣🤣🤣🤣🤣… This Girl Is Savage.#TuesdayThoughts #ReekadoBanks pic.twitter.com/pJaA4ZGnZz

Nobody:
Girl: Xo Reekado Banks, u couldn’t even call me back after having sex with me..

LIVE INTERVIEW
Caller : you had sex with me and refused to call back…
Reekado Banks:😨
Presenters : Wrong number

*Reekado Banks when passing by and is being ask to come for another live interview *: pic.twitter.com/nKSmdh1deX

It is truly a problem when a media platform begins to pursue shock value at the expense of an artistes’ image.

So that was a prank call on a tv show, it was funny then , but I do not like where this is headed!

Charlize Theron and Helen Mirren are set to return for “Fast & Furious 9”, Vin Diesel confirmed in an Instagram post. The two were last cast in “Furious 7”, which billed over $1billion in box office sales worldwide. “Fast & Furious 9” is scheduled for release on May 22, 2020.

With news that Helen Mirren and Charlize Theron would be returning for the next installment in the Fast franchise, @IGN got a Fast & Furious subtitle brainstorming session started with the help of your text messages. https://t.co/vA7nXwm14X

Charlize Theron and Helen Mirren are both returning for “Fast & Furious 9” https://t.co/7Cn6waolGi pic.twitter.com/ge50YurP1k