Mechanics from across the country will battle it out for the grand prize of a brand-new Toyota Hilux single cab pickup valued at Ksh 3 million. The first and second runners up will obtain Ksh 500, 000 and Ksh 250, 000 respectively to help further grow their businesses.

“The Total Quartz Golden Spanner Competition’’ aims to equip the entrants with skills in a number of vehicle diagnostic and service areas. The entrants in the first round of the competition will take part in four elimination challenges namely: Tool Challenge, Spark plug Challenge, Oil filter Challenge, Quick Fire Challenge. Successful participants in the first round will proceed to the second round of the competition which will be held in 14 regions across the country,” said Mr. Arvinder Reel, Managing Director at Toyota Kenya.

The competition which will feature three stages taking place at selected  Toyota service outlets nationwide and the grand finale at the Toyota Kenya Academy in Nairobi.

“The second round will be rolled out at Toyota Kenya dealer workshops in the regions where the mechanics will be tested on theory and practical evaluations that will be facilitated by the Toyota Kenya Academy training instructors.  Three candidates will then be shortlisted to attend the finals in Nairobi at Toyota Kenya Academy (TKA). The finals will run for 5 days, where the contestant will go through various  elimination challenges, that will see 10 compete for the grand prize,” added Mr. Reel. 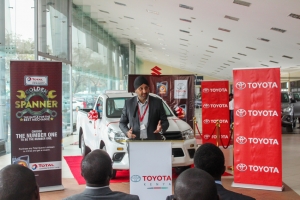 “Mechanics buying any of our TOTAL QUARTZ Engine Oil brands will obtain a scratch Coupon  with a short code that will be required to send to 40740. Upon sending the short code, the contestant will be sent two sets of questions which he/she will be required to respond to. The contestant will be awarded points based on the number of correct answers given with those having the highest score getting a ticket into the competition,” said Managing Director of Total Kenya Mr. Olagoke Aluko.

“In addition to getting a chance to win the grand prize, the competitors will further hone their mechanic skills and knowledge in automotive servicing and repairs which will help grow their individual start-ups or businesses,” added Mr. Aluko

Toyota Kenya Managing Director also added that the Total Quartz Golden Spanner Competition for mechanics also aims to build self-reliant young people who embrace blue-collar jobs and create opportunities for them and secure bright futures and maximize through maximizing on their potential.

According to the economic survey 2019 by the Kenya National Bureau of Statistics, the contribution of self-employment to household income is at 1.9 per cent and 6.2 per cent for rural and urban areas respectively. A big number of this group is engaged in the jua kali sector and other Small and Medium Enterprises (SMEs).