September is Suicide prevention month Did you know that according to Maternal Mental Health Awareness Alliance, as many as 1 in 5 new mothers’ experiences some type of perinatal mood and anxiety disorder (PMADs). These illnesses frequently go unnoticed and untreated, often with tragic and long-term consequences to both mother and child.

How many times have you been at a baby shower and everyone made ‘baby blues’ jokes because a loved one was feeling ‘not in the mood’ for anything at that time? “

Speaking to Dr Steve Amayo of Medicross Kenya Clinics who handles PPD at their facility, I understand that a mother doesn’t have to kill her child to be diagnosed with the condition. Many new mothers are suffering, surprisingly fathers too without knowing that they are not just tired. They are unwell. In the rare instances, a husband may feel competitive for the mother’s love and attention.

“Postpartum depression is a form of major depression with earliest signs being feeling low and depressed around the child’s birthing time. 85% of women will feel depressed with some mood disturbances which are transient and mild. 10-15% of women may experience a more disabling or persistent depression and as low as 0.1% may progress to postpartum psychosis. Symptoms resemble other depression episodes e.g depressed low mood, tearfulness, insomnia, lack of pleasure , fatigue , appetite disturbance , suicidal ideation and recent thoughts of death. In Postpartum, they present with intense sadness anxiety and or despair. This interferes with mother’s ability to function thereby risking the baby’s health.” said Dr Steve.

Dr Steve emphasized that people affected by PPD should seek medical consultation. Psychological and psychosocial support will be provided on the same. Failure of response will require medication. Electroconvulsive therapy is also considered and is effective especially those with suicidal ideation.

Psychiatrists follow both the patient and family on the same and institute therapy where applicable. Patients with puerperal psychosis require admission and inpatient management as it is a medical emergency. They usually present with bipolar disorders and require medication. Electroconvulsive therapy is usually effective and we’ll tolerated for them

Mental Health is critical for new mothers. Medicross is  currently holding medical camps where there’ll do basic checkups as well as health talks. As September is National Suicidal Awareness month, Medicross Kenya has organized a series of medical camps across the country, that are open to the public. They hope to help mothers and fathers understand this condition and how to manage it. 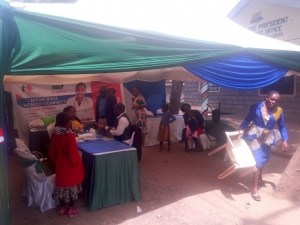