Serah Ndanu (Sumu la Penzi) been missing in action in the acting scene for almost two years since she played Trizzy in the award-winning drama-comedy series Sue na Jonnie. Now she’s back, and she means business she takes on the lead role in the new drama series Pieces of Us.

Ndanu plays Joey, a character she describes as a perfectionist who’s successful in all aspects of life except her love life. See Joey is in a rush to get married and settle down, that’s if she can convince or “nag” her live-in boyfriend of five years, Richard (played by Brian Ogola, Lusala) into finally proposing.

“Richard is sceptical whether he wants to marry such a woman who’s powerful. He’s also a casanova with secrets from his past. And he’s torn between whether he’s completely changed and loves Joey or if he’s doing this for the family or for himself. So that’s going to be played out,” Ndanu says.

In the middle of it all are their parents – Joey’s dad and Richard’s mom – who both want them to get married as soon as possible for their own selfish reasons and are pulling the strings of the whole relationship from the sidelines.

Things get even more complicated when Richard’s past comes back to haunt him, while Joey tries to keep her own secrets under wraps.

For an actor who’s been absent in the industry for a while, at what moment did you know that Joey was the right role for a comeback?

For me, when it comes to accepting roles, it’s always about the challenge and also about the kind of message I’m selling out there. After being inactive in the film/TV industry for almost two years, I wanted to come back and do something that was more impactful. I fell in love with Joey the moment I heard about her. She’s a character that’s relatable to a lot of young women right now. Society has pressured women to work so hard to be successful and independent. But at the same time such women who succeed have become a big threat to men such that they are sceptical whether they want to marry this kind of a woman. This is Joey’s story and it’s a story that I really wanted to share with people because so many are going through this. 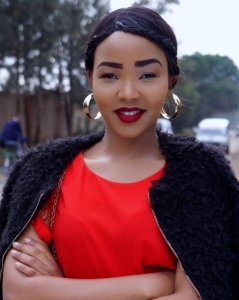 Was it difficult to ease into the role after your absence in the acting scene for this long?

No, it wasn’t. I keep saying that acting is my first love. There’s always an actor deep inside of me, whether I am in a film set or not. The most amazing thing is that it was so easy to become Joey because of how I connected with the character. And when you know a Joey somewhere in real life it makes it even much easier because you can see that person and you know that you have such a big responsibility in telling that story. To me, it’s more about the excitement than struggling to get back into the industry.

Can you comment on Joey’s pressure to get married, even though she’s already successful and independent and how much the society is shaping what a successful woman should be?

Joey is a very structured woman; she has timelines for everything. She comes from a rich family and has achieved so much. The only thing left to do is for her to get married, and that’s why she’s giving Richard so much pressure. She wants to do this for herself but also so that the society can stop judging her because she hates being a failure at anything. She’s successful in all other areas and she wants her love life to be successful as well.

What was your biggest challenge trying to bring Joey to life?

My biggest challenge was not letting the character get into my head. I’m being very cautious with not letting Joey get into my head, and making me believe in that reality or that world. It’s always been so hard for me to tap out of a character, and I’m trying so hard with Joey to leave her on set and not to bring her home.

How was it like working with Brian Ogola as your onscreen boyfriend?

Absolutely fantastic. Brian is very talented and we are both very critical of and we motivate each other. Being on set with very talented people and doing something different from what I’m used to is the most incredible thing. The cast is so passionate, you cannot afford to mess around or lag behind. Everybody is bringing their A game into the show and I’m just grateful that I get the chance to work with people who take this industry very seriously.