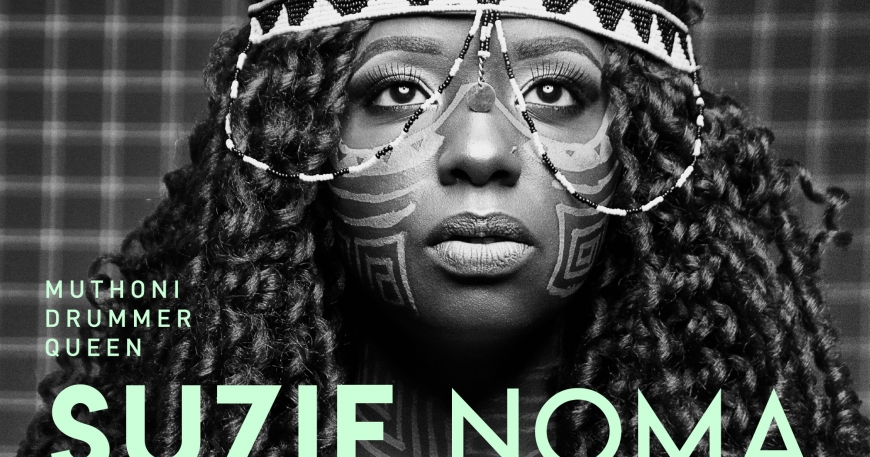 Acclaimed Kenyan singer, rapper, drummer and all rounded boss Lady, Muthoni Drummer Queen just dropped a new music video for the single: “Suzie Noma”. This certified club banger is the third single from her upcoming album titled ‘SHE’ scheduled for March 2018. Produced by Swiss production duo Greg ‘GR!’ Escoffey and Jean ‘Hook’ – “Suzie Noma” is built on a dancehall foundation mixed in with strong subs and layered with catchy melodic progressions, and marks yet another signature collaboration between Muthoni and the Swiss duo.

Muthoni talks about the song’s powerful message: “Suzie Noma is a celebration of female friendship and empowerment of women all over Africa. It’s about building something with your girls for yourselves and for future generations. It’s about us women building our financial security together and manifesting big dreams!” The single’s audio comes alongside a dance video that features Muthoni Drummer Queens dance crew in Switzerland. In Muthoni’s words: “I really want everyone to listen to the song as they dance to it. I really want everyone to catch the uplifting vibes that we put into the track and to joyfully celebrate themselves and the women in their life.”

Muthoni the Drummer Queen is a singer, rapper and drummer from Kenya. A unique talent, her sound fuses Kenyan drum rhythms, pop, soul and hip-hop. Muthoni’s upcoming album ‘SHE’ will be released March 2018. ‘SHE’ is a 12-track album that is centred around 11 different women’s experiences with a bonus track titled “Make it Right”. The dominant sounds of the project are hip-hop fused in R&B reggae/dancehall and Blues. Muthoni is celebrated for her hit songs like “Nai Ni Ya Who”, “Mikono Kwenye Hewa” and “Vile Inafaa” featuring Octopizzo. She released her first EP project ‘Mambo Bado’ in 2008 followed by her first full-length work titled ‘The Human Condition’ a year later. Her smash hit “Mikono Kwenye Hewa” saw her nominated for Best New Act at the MTV MAMA awards in 2009, and described at large as “The African Missy Elliot meets M.I.A.