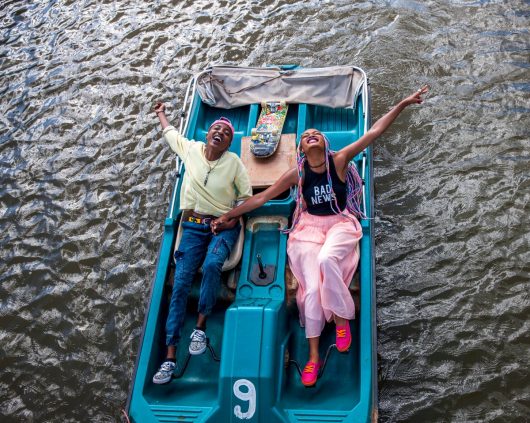 Kenyan gay film ‘Rafiki’ finally got its much-hyped world premiere in Cannes yesterday, writing history as the first ever Kenyan feature to screen at the prestigious film festival. The lesbian love story film, which has been banned in Kenya, received strong applause from the festival audiences. Film director Wanuri Kahiu and the two leads Sheila Munyiva and Samantha Mugatsia graced the red carpet at the French Riviera venue.

What’s your take on the ban?

In Kenya, gay sex and relationships are illegal and people found contravening this law could face a 14 years prison sentence. Kenya and Africa as a whole are known to be traditionally staunchly conservative and religious, and to some the Kenya Film Classification Board’s decision to ban the film is an effort to protect what’s left of our “moral fibre”.

This isn’t the first ban KFCB has handed out on grounds of homosexuality. A YouTube music video titled ‘Same Love’ (an unofficial remix of Macklemore’s hit song) by Art Attack featuring bi-sexual rapper Noti Flow and her girlfriend Soila Cole alongside a Tanzanian gay actor and his boyfriend was also banned back in 2016. The video remains up but with a viewer discretion.

On the flip side…

Some argue that rather than vilify the movie for its content and story, Kenya needs to embrace and celebrate ‘Rafiki’ because it is putting our hamstrung film industry on the map. I can’t think of a more committed ambassador for Kenyan and African film than Wanuri Kahiu. She has represented the country across international festivals and conferences like this year’s World Economic Forum in Davos where she addressed world leaders. And it’s a shame that she won’t be able to bring her movie to the country she vouches for. Is this a case of a prophet not being accepted in their own country?

Another argument that could be brought forth, is the fact that we as Kenyans, especially adults should be given the right to make a choice on the types of films we would like to watch, especially given the fact that this particular film doesn’t have any confirmed explicit scenes.

Furthermore, it’s interesting that KFCB gave a pass to such R-rated Hollywood films as 50 Shades Freed and Red Sparrow to screen in Kenyan cinemas. Can our “moral fibre” not stretch enough to accommodate a harmless Kenyan-made gay movie?

What’s your take on the ban, are you for it or against it?