Mike Kudakwashe is a legend of Zimbabwean comedy, bringing the laughs on both TV and the stand-up stage. He’s been called ‘the funniest man in Zimbabwe’, and it’s easy to see why when you get into the same room as him – he’s incredibly infectious with his words and laughter. He may come from a country which is currently in political and economic turmoil, but there’s no telling that from Mike’s spirited attitude. He wears a constant smile on his face, even his T-shirt has a smiley face on a map of Zimbabwe. You get a sense from him that rather than the pity being peddled in the news media, what Zimbabweans really want, like anyone else, is a simple hand of friendship.

Mike is in Kenya to perform his one-man stand-up comedy dubbed Embrace the Madness this Sunday, October 1st at the 2017 Storymoja Festival.

How are you finding Nairobi?
Nairobi is great. A very vibrant and big city – I mean, I come from Harare in Zimbabwe which is a small portion of Nairobi. There are so many people here, and very friendly. I love this place. One of my most favourite things in Kenya… Tusker! [Laughs.] I was introduced to it the first time I was here, performing the play A Man Like You, and I fell in love with it.

Tell us a bit about your stand-up show and why you called it ‘Embrace the Madness’.
My style of stand-up is social commentary. I talk about people and myself a lot – just human nature. Humans are the funniest beings on the planet, we do strange things. I call it ‘Embrace the Madness’ because essentially, human beings are mad – you know, we’re insane. So, let’s just embrace who we are. This is actually, my very first one-man stand-up show. Most of the time I’m featuring with other people, but this time I have my own show – and I’m happy that I’m doing it in Kenya. 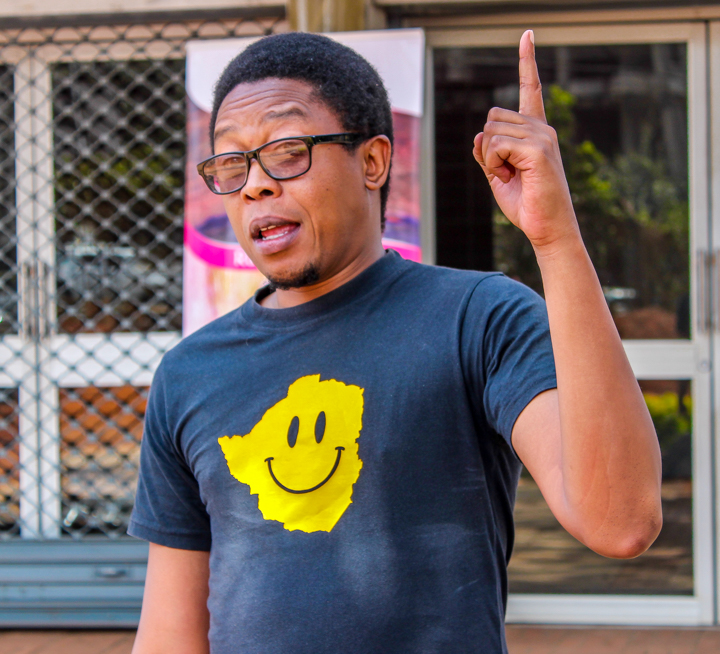 Why did you get into comedy and does it have a correlation to the environment that you grew up in?
I started off as an actor, and I always consider myself an actor first before a comedian. I got into comedy by default. Growing up, my father was a very funny man. We were always laughing in the house. So, I grew up with that funniness in me. One day I was filming and one of the premier stand-up comedians in Zimbabwe, who was a writer in the show, saw me and thought I was quite funny and said to come and perform at a show that he had every Thursday at a place we call The Book Café which was the arts hub in Harare. So, I was mentored by him until I got to do my own show. If it weren’t for him I’d probably have continued to be a funny actor but not a stand-up comedian.

What’s your all-time favourite joke?
Woah! I don’t have one. There are so many of them. Right now, my favourite comedian is South Africa’s Trevor Noah – he’s an inspiration. He’s so funny, and the way he formulates his jokes, when he gets to the punchline you’re like, “Oh, wow! I never saw that coming”. I love that.

Is there someone you’ve modelled your routine on?
I like the delivery style of the late Richard Pryor. He takes you on a journey with funny little stories that he tells. Mine is a little bit similar.

Are there any other comedians you admire?
Nigeria’s Basketmouth, South Africa’s Kagiso, and in Zimbabwe, Carl Joshua. He’s a guy who really should currently be called “the funniest man in Zimbabwe”, he’s been in like 26 cities all over the world and is still on tour right now. He’s phenomenally funny.

What was the last thing that made you laugh out loud?
[Laughs.] That was last night. We were with Silvia Cassini, my director, at her house and we just started talking and we asked ourselves, “Wouldn’t it be funny if we made A Man Like You [a tragic, terrorism-centred play] into a musical?”. Can you imagine singing those parts? We did a bit of it and it was hilarious!

You are also on TV. Your parody show ‘Zambezi News’ is popular back home. How do you get away with making fun of the Mugabe regime?
The thing is, there aren’t any direct attacks. People know exactly who we are making fun of, we just don’t say their names. So, it’s tough for them to come after us because then we say, “What are you afraid of? Are you saying this actually is you? So, you’re agreeing that we’re right?” It was hard in the early days; a few people didn’t like our show. Men in suits would come to talk to you. But now, I think even they see the fun in it. It’s harmless fun. 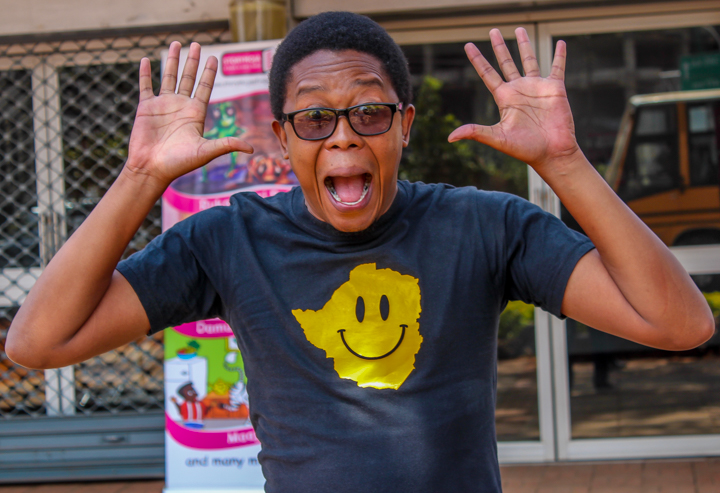 Any observations from an outsider perspective on Kenya’s current political climate?
It’s just amazing to see. So, you have a democracy here? There’s nothing like that in Zimbabwe – nowhere near! Who would dare go to the courts to challenge an election result? And even if you did, you will lose anyway. [Laughs.] So, it’s quite surprising that a court actually agreed that, yes these were not free and fair elections, let’s have another one. Then you’re given a new date on the 17th (October) then you decide, “No, no. That’s not a good date for me. I think I’m going on Safari that day.” [Laughs.] Then the electoral commission says, “Fine, fine, we’ll change it for another day when you’re free. How about the 26th? How’s your calendar?”, “Wait, let me check. Oh, I’m just washing my head, It’s OK, we can have it on that day.” [Laughs.] Wow! I wanna live here.

Can we expect lots of laughs from your show at the Storymoja Festival?
You know, it’s terrifyingly hard to make a Zimbabwean laugh. We always say, if you make a Zimbabwean laugh, you can make anyone laugh. It’s dangerous to guarantee laughs, especially in a different country, but I’m hoping for a good show. I can definitely guarantee that I’m going to do my best. I’m bringing my A-game and my over 12 years of experience performing in Zim and South Africa. Hopefully, Kenyans will love it, and we can have a good laugh.

Should I Buy the New TECNO CAMON 19 Mondrian Edition Smartphone?

How TECNO is Embracing iF Design Award with CAMON 19 series

What to expect at OktobaFest 2022