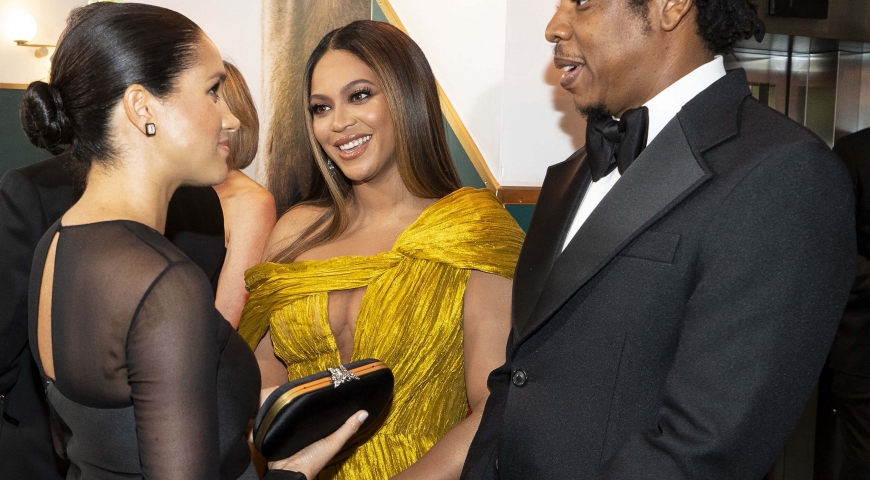 Beyoncé and the duchess of Sussex, Meghan Markle, met in public for the first time at the London Lion King Premiere. The collision of these two royalties had fans collectively cheering. Beyoncé’s husband, Jay-Z and Prince Harry were also present at the happening. They greeted each other affectionately. Beyoncé and Meghan embraced and linked hands.

According to Sky, As Meghan chatted with Beyoncé and Jay-Z, the rapper could be heard saying “congrats”, while his wife said “baby, so beautiful”.

Beyoncé also told the duchess: “We love you guys.”

Two queens at #TheLionKing premiere in London 😍😍😍 Beyoncé and Meghan are in the building. pic.twitter.com/xa6m2d7qoI

The singer stars as Nala in the Lion King live action remake which will start showing in theaters Thursday July 18th. The movie also stars Donald Glover (Simba), Chiwetel Ejiofor (Scar) and James Earl Jones reprising his role as Mufasa. Director Jon Favreau, and other stars such as Keegan Michael Key, Seth Rogen and Billie Eichner of the movie were also present at the premiere.

The premiere was held in “support of the conservation and communities work” of Prince Harry through the Royal Foundation, Buckingham Palace said.

Shoutout to Magical Kenya‘s who also got a special appearance at the Leicester Square premiere.