‘Disenchantment’ Series Review; A Wild Story About a Princess, Her Pet Demon & an Elf 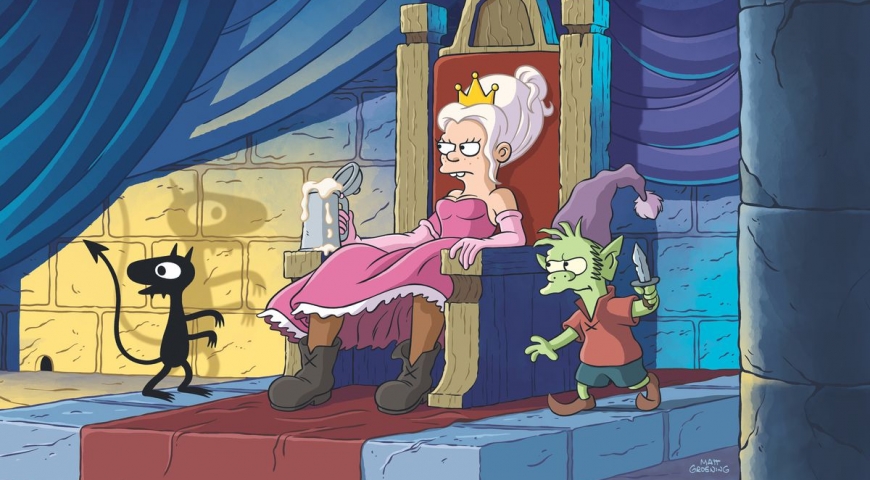 Princess Tiabeanie is anything but your typical medieval princess. She is a buck toothed alcoholic teenager with zero sense of responsibility. She is acting out against her father’s attempts to run every aspect of her life, has unresolved trauma over her mother’s death, a personal demon who is an enabler in her wild adventures and an elf who is hopelessly in love with her.

I’m not sure if Beanie is free spirited or spoilt. Her demon, Luci, definitely has a role to play in her misadventures, but most of the time, Beanie feels like a screw up who seriously just needs to try and get her act together. The allure to her character is her innocent take on life, even though she kills her fiancee in the first episode, she always means well and just wants to have a good time as she tries to find herself.

Her dad, Zog, is a narcissist with terrible parenting skills. The only time he ever speaks to Beanie is when he is yelling at her. Although, like Beanie, he always means well and doesn’t want to see his daughter’s life go to waste.

Oona, Beanie’s step-mother is trapped in a loveless marriage to Zog, is addicted to hallucinogens and has an icebox where her heart used to be. Her union is driven by the need to solidify a military rather than love.

Beanie’s escapades see her kidnap a diplomat, screw up a diplomatic mission, get ripped off and eventually beat up a gang of bandits, struggle to find a boyfriend who is not terrified of her dad, trash her father’s castle and accidentally allow her kingdom to be overthrown by Vikings.

Part 1 is available on Netflix. The episodes, eight in total, are about 30 minutes long.