Dear Child, There is a Method to My Madness 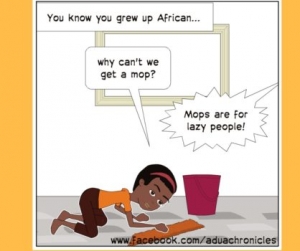 “There is a method to the madness!”
This phrase comes from Shakespeare’s play ‘Hamlet’. It means that although someone seems to be behaving strangely, there is a reason for their behavior.

My mother had very simple rules that were summarised into three. You could not be Rude, Stupid or Lazy. I understood the first two pretty well but the lazy part was always taken too far in my opinion (that I could not voice!) There was never a clear line between ‘laziness’ and resting.

It seemed the only acceptable reason for taking a much needed nap in the afternoon was being pregnant. Being pregnant in my mother’s house was a life threatening choice, so I guess there was really no reason to be napping.

We could not even be seated long enough to entertain our friends before my mother would announce that the ‘visitorship’ was over. We were then invited to continue the conversation in the kitchen while we cut onions or washed dishes.

I remember once during school holidays I casually mentioned to my mother that I was bored. “Bored! How can you be bored and the grass needs cutting, my clothes need ironing and the chicken house has not been cleaned?”

I honestly think my mother thought doing chores was a fun pass time for a teenager. 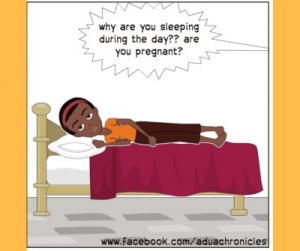 As a grown up in my own house where I can do what I want, I find myself ‘rebelling’. I literally lie in bed all day on Sundays, even though I can still hear my mother quote her scripture ‘A little slumber, a little folding of the hands to rest, and poverty will come upon you like a robber, and want like an armed man’. My sister washes her clothes seated. Even if she is washing just one shirt. Then I realised, there is a reason for this madness.

We have been unconsciously voicing our opinion through our ‘rebellion’! I also understood my mother’s ‘madness’, I just regret never knowing the reason. We laugh about growing up now because we understand. I wonder what madness I am creating in my children’s life?
I hope it is something they can laugh at and that the ‘rebelling’ will be as painless as sleeping all day on Sundays or washing a shirt while seated.

Fun, Games and all around “Eater-tainment” at Ballpoint Social Club