“Papa Hemingway” by A.E.Hotchner (1917-2020) should not be read as a biography or a historical document. It is a fond remembrance of a friendship with a remarkable man. I loved it.

The first part of the book is very light and enjoyable. It’s 1948 and 30 year old Hotchner is sent to Cuba by Cosmopolitan magazine to try and talk veteran writer and war correspondent Ernest Hemingway into writing a piece about “the future of literature”.

Hotchner describes being too daunted to approach Hemingway directly and left a cowardly note for him instead. To his surprise, Hemingway calls him the next morning and proposes they should meet in a bar called “La Florida” that same evening.

As Hotchner tells it, the two men hit it off right away. Veteran Hemingway, then nearly 50, relishes in treating the much younger Hotchner to a large selection of colorful personal anecdotes over a tidal wave of “Papa Doble Frozen Daiquiris” without discussing the business at hand. This continues on for the next few days, with Hemingway even taking Hotchner on a fishing trip on his boat, a rite of passage of sorts. 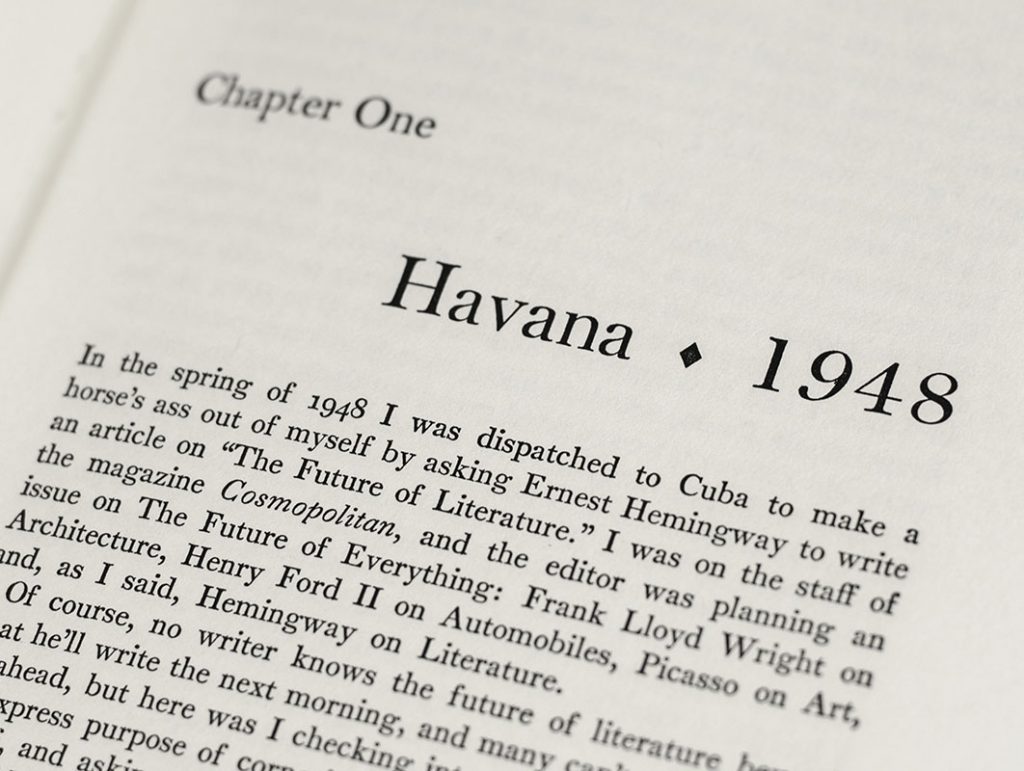 You can sense the joy that the older man experiences in recounting his adventures and war stories to his new-found audience, probably embellishing and polishing up his anecdotes even more than usual. A process of “hemingwayification” seems to be at work here, a kind of “intensifying” of events past to make clear their essence and emotional impact on the narrator.

Hemingway is quoted as saying, “All good books have one thing in common – they are truer than if they had really happened, and if you’ve read one of them you will feel all that happened, happened to you and then it belongs to you forever: the happiness and unhappiness, good and evil, ecstasy and sorrow, the food, wine, beds, people and the weather. If you can give that to readers, then you’re a writer.”

The first part of the book reads like a large collection of the best bar stories you’re likely to have heard from anyone. I could quote many examples, but let’s leave them in the book.

Hotchner also records numerous statements by the writer regarding the background of various of his works and also anecdotes regarding some of his famous friends. I think that these things should be read in the spirit of the conversations that led to them being said; they will be partially true, or could have been true, or have rubbed shoulders with the truth some place some time, or perhaps they are the poetic truth rather than the dreary literal truth- at any rate, they have the flavor of veracity without the burden of detail.

By my own experience, everything that we call “an adventure” consists of about 99% hassle and inconvenience with only a few moments of a gemlike quality, and it is these gems that we assemble into sparkling conversation pieces over a barrel of “Papa Dobles”. Or in neat paragraphs in a biography for that matter.

In the middle part of the book, Hotchner describes his travels as part of the Hemingway entourage. And what travels they are! Hemingway seems to have been a real boon companion to those that held his respect. It is wonderful to see how the writer overflows with local knowledge and countless anecdotes of the places and people they visit.

I think it is here that Hotchner promoted from being “someone to retell all my old stories to” to “someone with whom I create new memories and anecdotes”. Case in point is the jape of dressing Hotchner up as a matador and having him enter the bullring as an official spare who would step in if the leading matadors would be incapacitated before the bulls would be dispatched. This event is re-told with glee by Hemingway in his sunset book, “the dangerous summer” and by Hotchner in his personal memoir as well.

It is not all fun and games though. We can see Hemingway’s physical and mental health deteriorating over the course of the years. The double plane crash he experienced in Africa during a safari in 1953 left permanent physical damage, not helped by his habit of increasing self-medication with alcohol.

We see the great writer diminish before our eyes. Why did a great friend like Hotchner not stage an intervention? My guess is that Hemingway and Hotchner always remained in a master/pupil-like relation, and Hotchner may never have felt it was his place to intervene powerfully – or perhaps he felt that Hemingway would not listen to this type of advice in any case.

In the third part of the book, we can see Hemingway’s sunset and ultimate demise. Near the end of his life, his mind broke. He became increasingly delusional and paranoid – 1960s psychiatry just was not ready yet to provide effective treatment for this kind of condition. Electroshock therapy and certain medications were used, but failed to reverse the course of his decline. Frankly, reading Hotchner’s account, it is not surprising that Hemingway killed himself in the end.

What to make of all this? As I stated at the start of my review, I don’t see this book as a historical document, as source material for finding out what “factually happened”, or an “even-handed” account of his life and deeds. This book is none of those.

I also stay away from speculating on how far Hotchner was actually part of Hemingway’s “inner circle” or whether he was a talented sort of “hanger on” that managed to inveigle himself for selfish reasons.

Speaking about inveigling, it cannot be forgotten that Hotchner often acted as a go-between or agent of various publishers / producers and the writer, obtaining quite a number of lucrative deals for Hemingway. Therefore, ensuring that Hotchner remained loyal and sufficiently in awe of him must have made sound commercial sense to the writer.

Yet at the same time, to me there is enough evidence of good chemistry between the two men – not just from Hotchner’s writings, but also from Hemingway’s. And they did have some genuine adventures together, even if a process of “Hemingwayification” has been applied to them. To me their connection rings true, even if it had multiple layers, or rather perhaps *because* it had multiple layers.

So finally, I appreciate this book as a collection of stories about Hemingway, as retold by the writer himself, or recounted from first hand experiences. I don’t care too much for the exact ingredients of the dish, but I do relish the flavor.

Hemingway at his best was a great companion and I would wish for someone like that in my circle of acquaintances. Hemingway at his worst could be intemperate and self-destructive. I would have wished him better friends to lean on in those times.