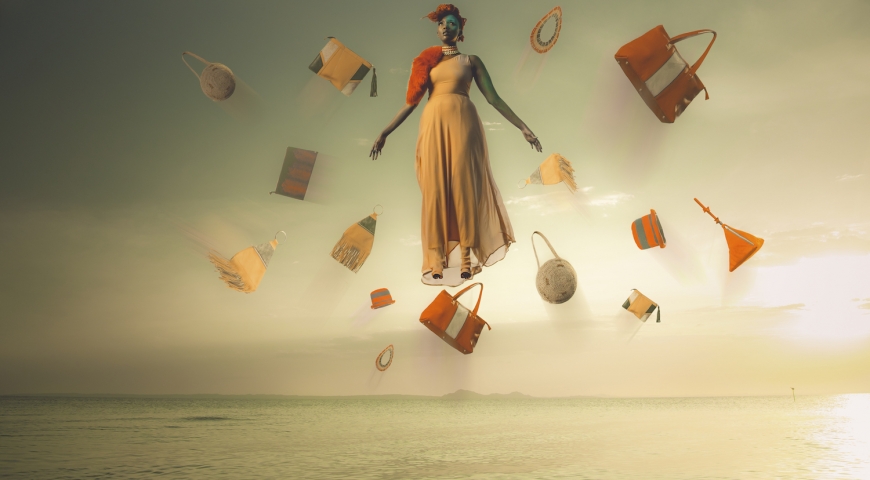 Floating, Flying is the second project from The Artists Xchange, a year long undertaking that brings together artists from Turkana, Karamoja, Kampala and Nairobi to produce work that responds to the issues facing the Ateker region (Turkana & Karamoja) in a direct or abstract manner.

The project is a collaboration of artists Margy Modo from Karamoja, Elizabeth Korikel from Turkana and Chebet Mutai from Nairobi.

Margy Modo creates modern fashion inspired by her heritage and is also a talented beading artist.

Chebet Mutai from Nairobi works in leather to create bags and home décor items. Together they worked to create Floating, Flying – a project that fused their sensibilities in décor, beading and leatherwork each showcasing elements from their heritage.

The project was shot in and around Eliye, Lake Turkana. The Artists Xchange is a companion project of the feature documentary Turkana: Races for Resources (www.turkanafilm.com) which will be released in 2020.

For years Turkana has been left behind. Its geographic location in the far reaches of Northern Kenya’s deserts coupled with deliberate policies 50 years ago that focussed the newly independent nation’s resources in the green and agriculturally rich south of the country meant that people from Turkana did not identify as Kenyan. But with recent finds of valuable resources including oil and water in the region, Kenya is laying claim on Turkana.

Across the border from Turkana lies the Karamoja region in Uganda. Karamoja is also endowed with resources including gold, limestone and marble and has had a similarly fraught relationship with the capital and the agricultural south of the country.

Turkana is a place of great beauty. Its stark, arid landscape is home to Lake Turkana, the largest desert lake in the world. The lake’s distinctive green waters led it to be named the Jade Sea and its craters and crocodile-filled islands make it one of the most unique places to visit in Kenya. The lake’s parks are now listed as a UNESCO World Heritage Site. The region is also home to some of the earliest hominoid fossils providing a link to man’s earliest ancestors and the peopling of the earth. Karamoja also boasts dramatic landscapes such as the mountains in Moroto.

This is a time of great change in the Ateker cluster region and there is an opportunity for artists from the region and beyond to be part of the discussion, exchange as well as bring art to the forefront of some of the most urgent issues of the region. With all the valuable minerals being found in the region, communities need to be treated as equal partners. They are the custodians of a rich heritage that can inform a uniquely African thinking for what these natural resource finds mean to us.